Sébastien Langlade is 8 years old when tropical cyclone CLOTILDA hits Reunion. The cyclonic episode will mark him so much that this event will push him to become a meteorologist and, in particular, a cyclone forecaster at the RSMC of Réunion.

We are in the midst of a weak 1986/87 hurricane season, probably due to a global climate context marked by a strong El Nino in the Pacific. As we enter the month of February 1987, only 3 systems were observed. It is in this situation that the episode CLOTILDA intervenes.

Sébastien Langlade is 8 years old when the system is formed off the eastern coast of Madagascar. He lives in Bellepierre, in the heights of Saint-Denis. From there, it has a breathtaking view of the city and the sea, allowing it to observe the cyclonic swell, a phenomenon that interests it to the highest point.

So far, we can not say that Sebastian has experienced major cyclonic episodes. He was way too young during HYACINTHE and FLORINE. The only phenomena he remembers are ERINESTA and BAKOLY which generated a significant cyclonic swell on the Reunion coast. But the ongoing cyclogenesis between Madagascar and Reunion will be an opportunity for him to live an event that will have an impact on his life.

Monday, February 9, we started talking about CLOTILDA. The storm approaches Reunion atypically by the West. Sebastien is therefore on the lookout for any information. His father who taught him to point cyclones on vintage maps, runs at every point broadcast on the radio. The young Dionysian who does not miss any information on CLOTILDA is excited to live the arrival of a phenomenon.

The days preceding the impact are marked by exceptional rainfall. The western approach of the island brings back a flow of North loaded with humidity, producing intense rains on the department. Sébastien does not keep precise memories of this rainy sequence. On the other hand, he will be stunned by discovering the images on television of the impressive destruction and flooding in many districts of Saint-Denis.

A violent and sudden degradation

Strangely, the morning of Friday the 13th, while the eye of the phenomenon is in the immediate vicinity of the island, there is an improvement of weather conditions. The Langlade family took advantage of this situation to open the shutters, to air the house locked for several days. This lull will be what is usually called "calm before the storm".

The weather is getting worse in the late morning. Sebastien remembers as if yesterday was the unfolding of events. At noon, the power goes out while the family watches TV. From there, conditions become cyclonic. The din is deafening and the sheet metal roof frightfully amplifies the effects of wind and rain.

This violent and sudden degradation results from the fact that the wall of the eye of the cyclone CLOTILDA penetrates on the North and North-East coasts of Reunion. At that moment, Sebastian attends something he had never experienced before and admits to being literally terrified by what he sees and hears. It will be all the more marked that his father, in the heart of the storm, had to fight in the bathroom to hold shutters that did not want to close.

The paroxysm of the degradation will be fast and will last between 1h and 1h30. Subsequently, it is again the lull. CLOTILDA is far from gone, quite the contrary. The heart of the cyclone will be blocked by the central relief of the island for several hours. The center of the phenomenon will decry several loops between the circuses before definitively leaving Reunion.

Sebastien will have lived during this episode a real emotional lift as he tells in the video. While such a frightening event could have made him hate cyclones, the opposite is happening at home. At this point he became a cyclone enthusiast, to the point that he will direct his studies very early on, with the specific aim of becoming a meteorologist.

After a passage by Météo France in the Antilles, he is now a cyclone forecaster at the RSMC Reunion. He realized his dream of living his passion by having a job allowing him to constantly meet tropical cyclones.

CLOTILDA will act like a real electric shock for Sébastien Langlade. Following this event, he will follow in a very precise and detailed way all tropical low pressure systems. On the occasion of this interview, I have the honor to discover Ali Baba's cave. All his memories of previous cyclone seasons are carefully stored. Every season since CLOTILDA in 1987 are described in notebooks with incredible precision.

In addition to information, you can find illustrations with newspaper clippings, photos and even drawings. I literally feel like I'm watching a professional weather publication. Yet, all this was achieved during his youth, from his 8 years to high school in 1998. The details of these archives are truly amazing and shows the very high level of his passion. There is no doubt that Sébastien was a cyclone forecaster well before the hour. 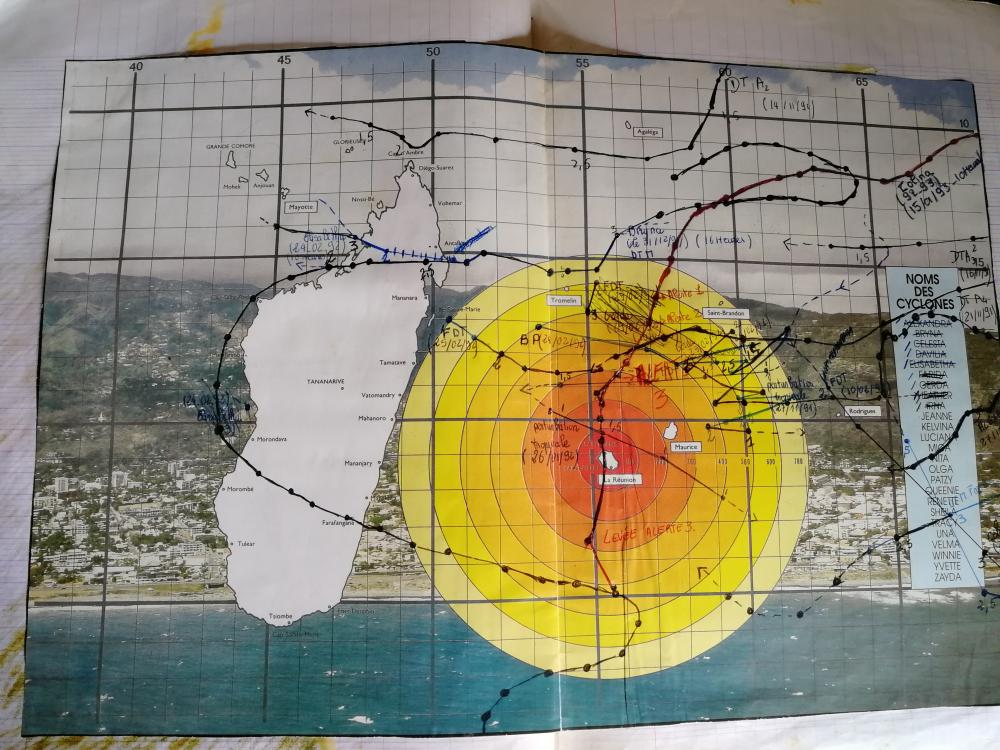 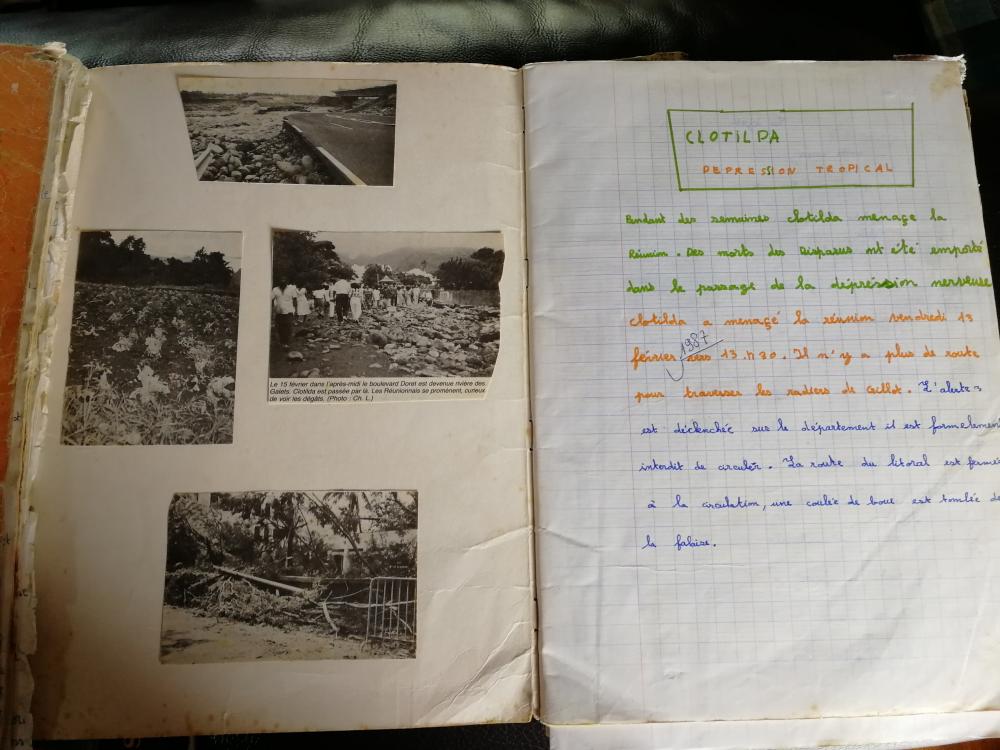 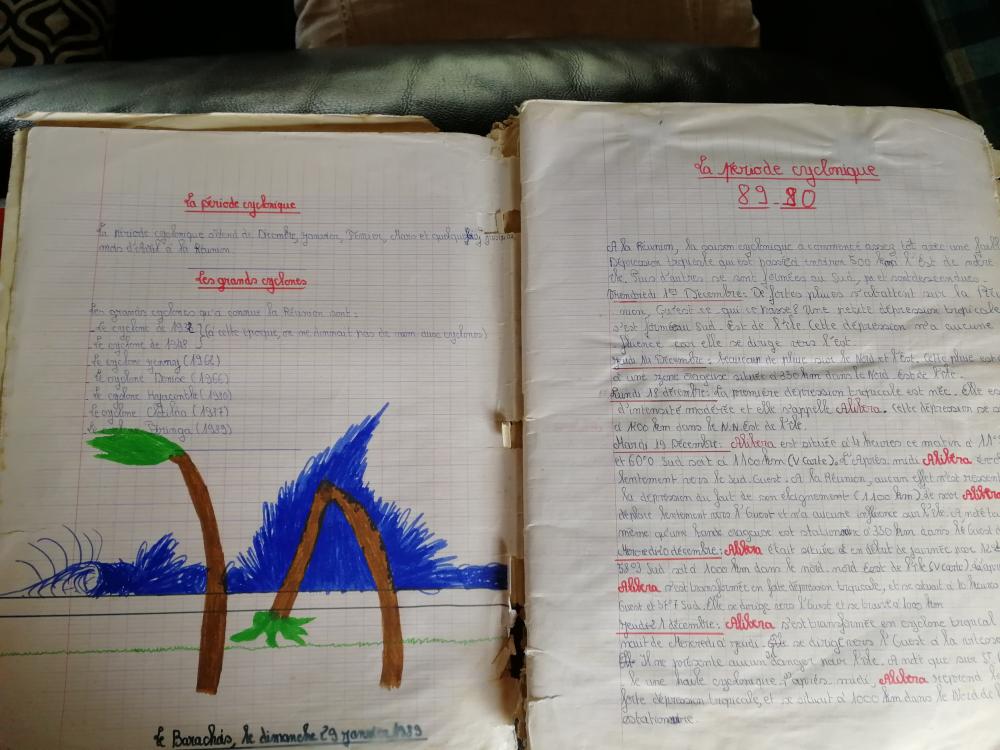 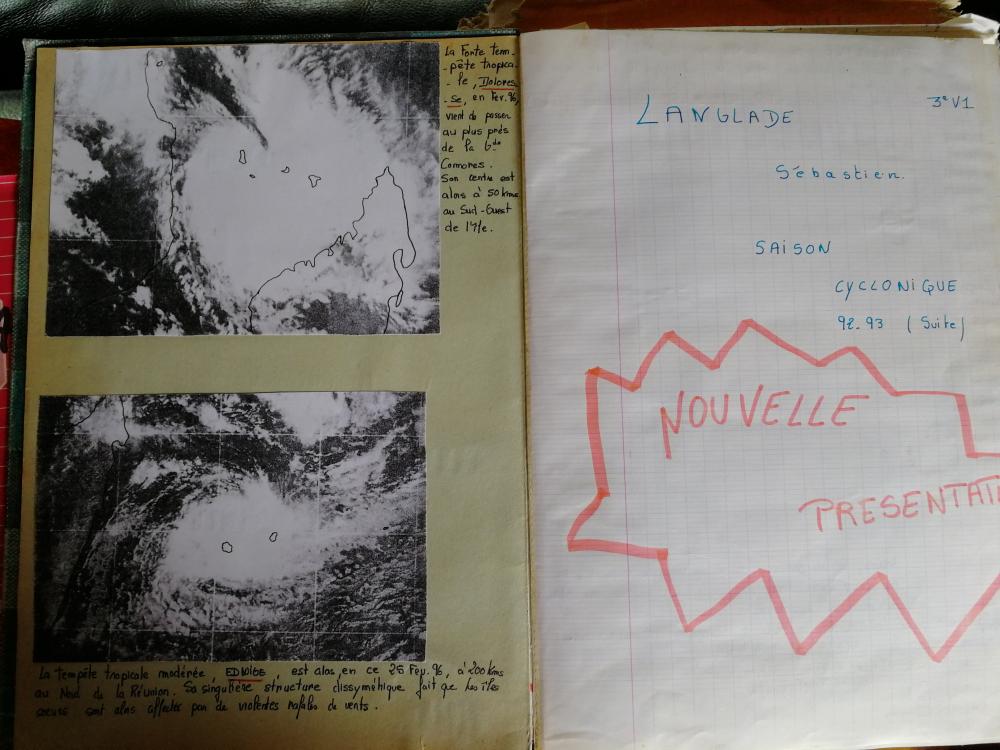 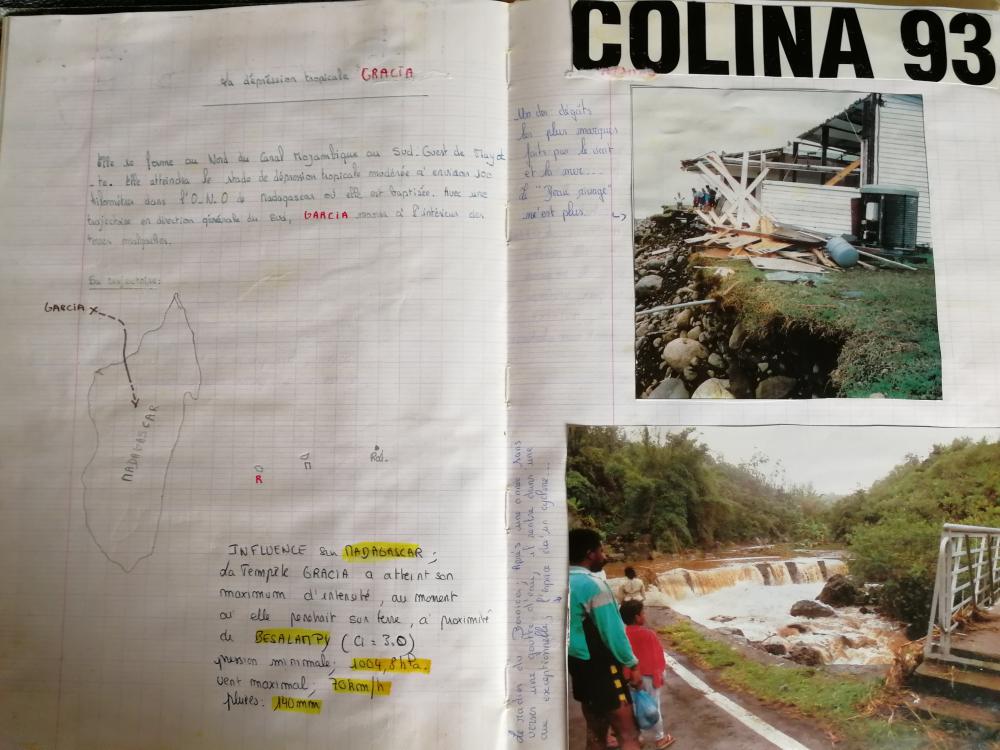 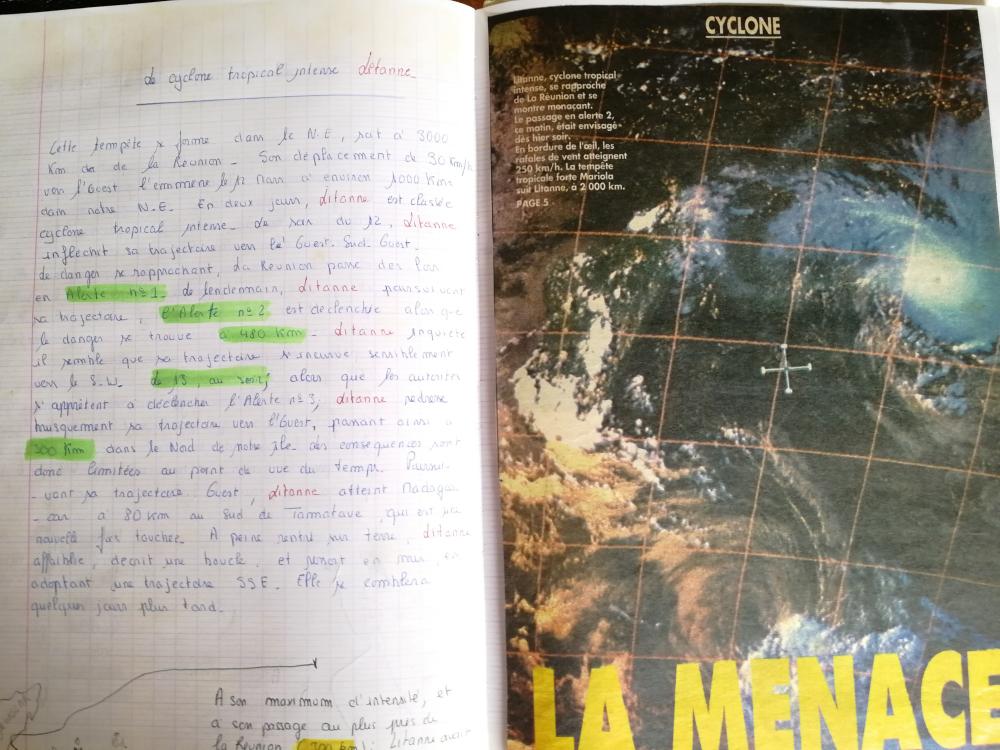 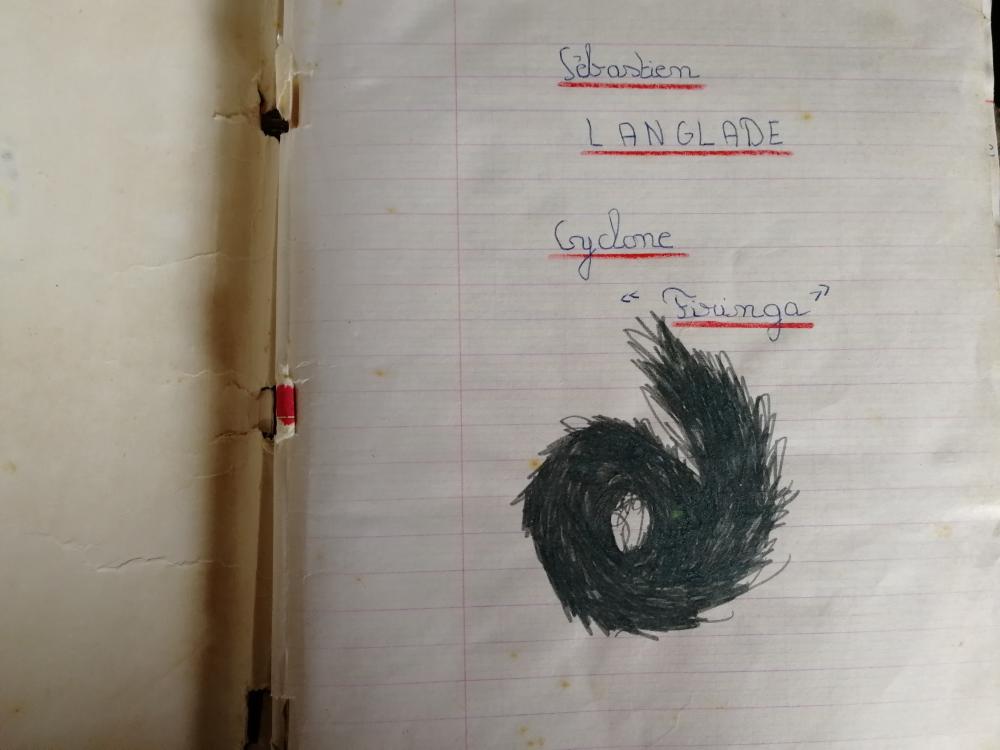