August 31, 2019: 10 UTC - Dorian has become a powerful and violent category 4 hurricane. The cloud pattern of the cyclone is very impressive. With max winds of 120 kt (140 mph), is strongest winds for Hurricane Atlantic during August since Gustav in 2008 according to Philip Klotzbach.

Dorian became the first major hurricane of the 2019 Atlantic hurricane season. Now, it's a very powerful category 4 hurricane with max winds of 120 kt (140 mph) and gust to 145 kt. Minimal central pressure is estimated to 948 mb. Cloud pattern of the cyclone became very impressive in the last 24h with symmetric ring of deep convection and a very clear eye in the middle of this torment. According to Philip Klotzbach, Dorian max winds is strongest winds for Hurricane Atlantic during August since Gustav in 2008.

Dorian move toward west-nothwestward at 10 kt and it should to pass near or over northwestern Bahamas from tonight and Sunday. Violent Hurricane conditions are expected in Abacos and Grand Bahama. Wind gust could blow up to 150 kt in Dorian eyewal in the next 24h. National Hurricane Hunter warn that a prolonged period of life-threatening storm surge and devastating hurricane-force winds are likely in portions of the northwestern Bahamas, particularly on the Abaco Islands and Grand Bahama Island. Residents must to listen to advice given by local emergency officials and have their hurricane preparations completed today.

What will Dorian do after impacting the bahamas? This is the question that is racking the brains of NHC forecasters. Hurricane Dorian is expected to slow down significantly in the next 48h. Several options are suggested by global models. First option, Dorian turn toward north before landfall over Florida peninsula. Second option, Dorian continue westward and hit directly Florida coast. The uncertainty is very high, and NHC forecaster are in the expectation. At the moment, everything is still possible and it is too soon to determine what the cyclone will do. It can't make head or tail of it. 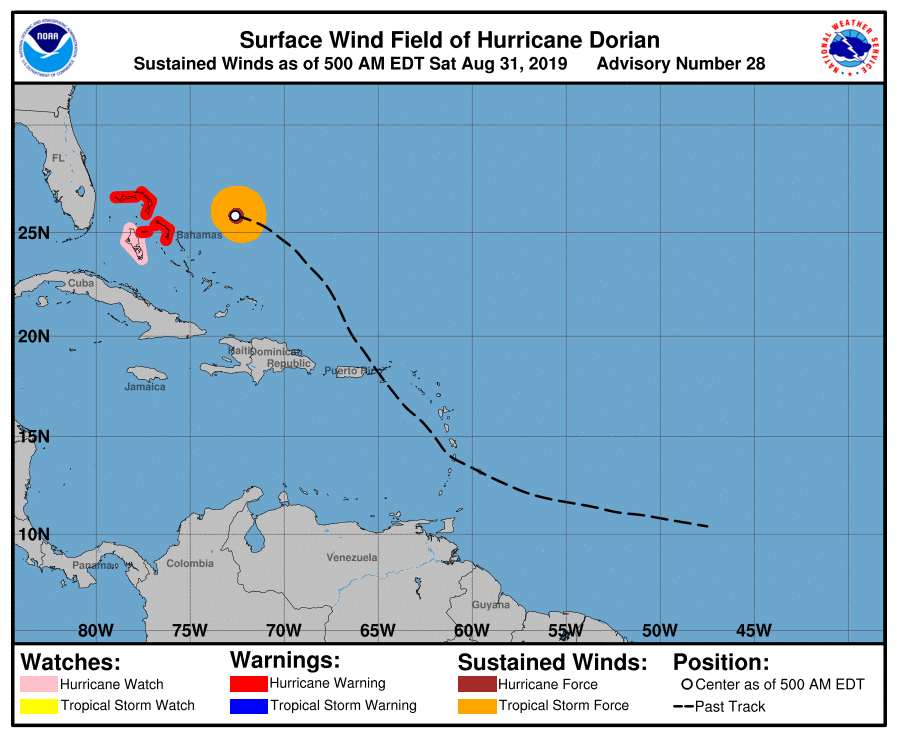 However, Dorian continues to pose a serious threat to Florida. The possibility of a landfall over the peninsula is far from being ruled out. Moreover, the last forecast track remains Florida coast in the cone of uncertainty. It means that significant impacts could occur even the center stay offshore according to NHC. So, life-threatening storm surge and devastating hurricane-force winds are still possible along portions of the Florida east coast by the early to middle part of next week.